Bloody Back, Cracked Back, Dippity Pig

Whatever name you've heard used this syndrome is a common problem in show pigs and something we get asked about almost daily.

Pigs that develop painful bloody sores on the back, hind end weakness, and fever.  It tends to be sudden onset so your pig may be fine at evening chores and have a bloody painful back by the next morning.  The “dipping” that people observe is a reaction the pig has to pain in its back. That reaction is responsible for the “dippity pig” name. On a personal note, I can’t tell you how much that silly name grates my nerves so you’ll only hear us calling it bloody or cracked back.

The following picture is a pig that is affected just before he was treated. His temp was 103.5 and he ate about 1/3 of his feed. 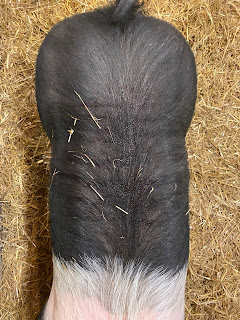 The first thing I want to say is no one knows for certain the cause. But here are some of the theories.  Some folks want to look at existing swine diseases and apply it to this syndrome.  A couple of the common things that folks point to is Erythema Multiforme, and dermatitis nephropathy syndrome.  Neither of these fit very well and many of the symptoms of those do not exist in these pigs.

One of the theories that has also been floated about is a herpesvirus. As of this writing it has never been identified and isolated but it makes sense since the lesions tend to be in the same location above the peripheral nerves and herpesvirus’ are known to be dormant in nerve fibers and suddenly manifest.  Think cold sores.

Another theory and one we subscribed to for years was that some mechanical insult happened to the skin and a bacterial infection ensued.  Our thinking has evolved and we don’t believe that is the primary mechanism.

We’ve heard people theorize that stress is the primary cause. I can say unequivocally that we see this in pigs of every stress status and the stress gene has no bearing on cracked backs.  In terms of environmental stressors it’s a little less definitive but it doesn’t really seem to occur with a direct correlation to stress.  For example, the pig that is pictured has been on the same farm, in the same pen, eating the same feed, and with the same pig in the next pen since he was 50#. He’s had about as stress free an existence as is possible and nothing changed in the days leading up his cracked back.

We have been swabbing and culturing these lesions for years and have grown several different bacteria from these lesions. The most common three are Staphylococcus, Streptococcus, and Pseudomonas. Since we don’t consistently see a single bacteria species in these lesions it doesn’t appear that bacteria are the primary cause.  We do think bacteria are secondary invaders and contribute to the problem.

How should you treat it:

Some breeders and veterinarians will tell you it’s self-limiting and will heal on its own so just leave it be. They are right....sort of. Cracked backs will heal in 7-10 days if you do nothing, but as competitive as the show ring has become can you really afford multiple days off feed? We also know the pigs off feed have increased risk of developing ulcers.

We know we can get pigs back on feed faster with intervention so we do.

Work with your veterinarian on a treatment plan.  We will treat them with anti-inflammatories like Banamine or aspirin and a broad spectrum antibiotic. In addition, we treat them topically.

There are a number of topical treatments that people use from grooming aids, sanitizers, and even fluid film.  We’ve seen and used them all as well as aluminum bandage spray. Many of you know that we have been working with esterfied medium chain triglycerides for the past few years. One of the products that has come from that work is Provilli and it has become our topical treatment of choice.  In addition, to being the most effective topical we’ve ever used it is also one of the more economical alternatives.  One bottle of Provilli concentrate will make 32 quarts of ready to use treatment.  So it’s less than $3 a quart.  Compare that to a popular sanitizer that makes 16 quarts at double the cost and requires waiting around for it to “activate.”

The attached chart shows plate counts of Staph over time with no treatment and with 0.2% Provilli. As you can see the Staph was completely eliminated by about 12 hours.

If a herpesvirus is involved in cracked backs we’ve known for decades that esterfied medium chains are an effective way to treat them, making Provilli an even more logical topical treatment.

For illustration purposes Provilli was the only treatment we gave the pig pictured at the beginning.  This photo was taken 12 hours later, the lesions have quit bleeding and are mostly dried up, his temp was 102.3 and he ate his entire ration. 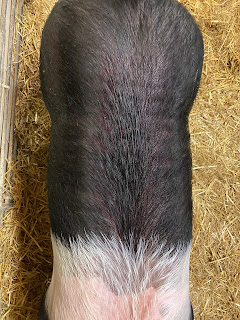 This photo was taken at 24 hours. The lesions are almost gone and he’s well on his way to normal. His temp remains normal at 102.4 and he is aggressively eating. 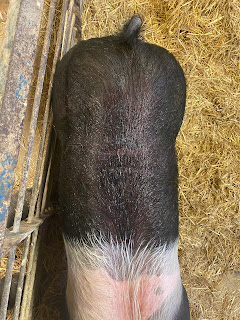 ·       Cracked backs are a rapid onset of characteristic bloody lesions on the back of pigs, accompanied by apparent rear limb weakness, and fever.

·       Work with your veterinarian on appropriate treatment to get these pigs back to normal quickly.

Popular posts from this blog

What You Need in Your Show Pig Medicine Cabinet

December 03, 2020
One of the frequent things I get asked is what medications show pig families should have on hand. Administering medications to food animals is serious business and proper care should be taken to use the right product at the right time the right way. Make sure that people that are doing so are properly trained and keep appropriate records. The goal here is not to replace the advice you get from your veterinarian. Some of the drugs that we will discuss are prescription and some you will use extra label so your relationship with your local veterinarian is critical.This is meant to provide some baseline information on a few common medications and how they are used.  Before we get to the medications let’s talk equipment. Having the right gear is mission critical and will save you time, money, and frustration.   Syringes: I really like the Ardes syringes for giving individual animal treatments. The fit in your hand and are lots easier than trying to use a disposable and
1 comment
Read more

Getting ready to Farrow

December 15, 2020
This time of year the question "What do we need to have and know to farrow our first gilt?" shows up in our inbox and on social media a bunch.   We aren't going to go into facilities except to say you need somewhere that you can keep 70 degrees or so draft free and provide supplemental heat for the pigs.   The first list of things are what you might need if you have to assist her.  As a rule we try to avoid assisting if we can but show pig producing gilts are decidedly not maternal and sometimes we have to help.  We like to tell folks to get two rubbermaid like totes.  One for the farowing gear and a second in case you want to split suckle. (More on that latter.) Inside the first tote you want to have  at a minimum OB Sleeves , lubricant , pig puller,   chlorhexidine disinfectan t, a small bucket, paper towels, a bottle of calcium gluconate , syringes and needles, and a spray bottle of iodine.   In addition to what is in the container you also want to have a drying agent
1 comment
Read more